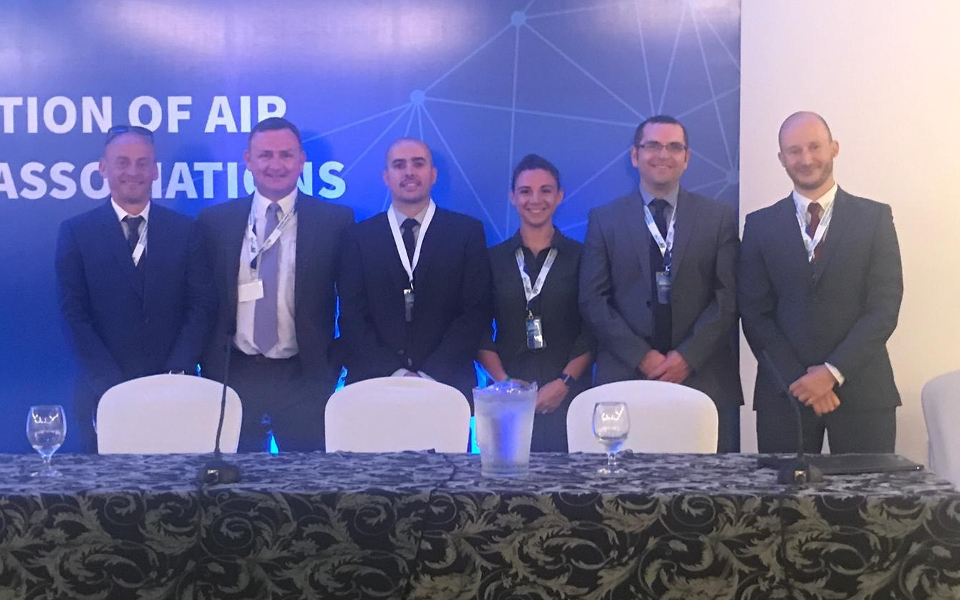 The Annual Conference is effectively the Annual General Meeting of all the IFATCA Member Associations, where directors and delegates from almost 130 countries discuss the rules and policies of the Federation and provide direction to the IFATCA Executive Board in the current ATM and ATC climate for the following 12 months. The conference is divided in three committees, A, B and C, each one dealing with different aspects of IFATCA and our profession.

Committee A deals with the aspects that keep an organisation like IFATCA in motion: administration, constitutional and financial affairs. Mark Taylor was once again the Secretary of Committee A. Luis Barbero attended Committee A representing GATCO and the UK. This year’s discussions saw the acceptance of Belarus, Central African Republic, Libya and United Arab Emirates as new member associations. Five positions on the Executive Board were filled, including the election of Mr Duncan Auld as President and also the election of our very own Mark Taylor as Executive Vice President Finance (EVPF), many congratulations!

The working papers of both the Constitutional and Administration Committee (CAC) and the Financial Committee (FIC) were presented to delegates. The most discussed papers concerned the abolition of the EVPF role  and the merger of CAC and FIC into one standing committee. The paper regarding the abolition of EVPF was eventually withdrawn so the role remained in place. The merger of CAC and FIC was not approved so both committees will continue to work separately. Another important topic was diversity and equality within IFATCA and the wider ATC community, with the decision to set up a Diversity, Equality and Ethics Task Force.

On the financial side, the Directors in Committee A tasked the EB with a 15% reduction in cost after lengthy discussions about the annual budget presented in Costa Rica.

Singapore was confirmed as next year’s venue for the Annual Conference. Jamaica and the United Kingdom were chosen as venues for 2021 and 2022, respectively.

Committee B deals with the technical and operations matters of the profession which are discussed during the year within the Technical and Operations Committee (TOC). James Robinson was once again the Secretary of Committee A while Tom Harrison and Katie Mason shared attendance to and participation in the committee sessions. TOC is tasked by the Member Associations to investigate, analyse and propose policy on evolving ATM and ATC topics like the integration of drones or remote towers.

This committee covered the ongoing work with ICAO on a number of matters, such as Civil-Military coordination and the recategorisation of wake turbulence categories (RECAT). Technology allowed David Guerin, GATCO member and drone expert, to remotely present the ongoing work regarding the safe integration of RPAS and VFR/IFR traffic, which has resulted in the recent guidelines published by IFATCA.

The committee also heard details of ongoing work to establish cross-network ground-ground links for example between European OLDI and NAM ICD (the American equivalent). Progress in this area will enable future cross continental ATFM to optimise flow and capacity balancing.

Committee C deals with the professional and legal matters of the profession, work carried out by the Professional and Legal Committee (PLC) during the year. Jez Pigden was the Chair of Committee C and Tom Harrison represented the UK as member of PLC. Among the topics in Committee C this year there was a paper on ATC licensing for those regions around the world where ATCOs are not licensed and the problems that can bring to ATC and their professional careers.

Consensus was reached over the fact that IFATCA should be conducting detailed research about retirement ages, especially for states which do not have adequate competency and medical licensing schemes. Tom Harrison presented the UK paper about report writing and the ideal post-incident process, which was part of the PLC work during the past year.

The UK will be a corresponding member to PLC until the 2020 Annual Conference.