GATCO-BALPA Controller-Pilot Symposium: collaborating for a safe and efficient future

GATCO, the British Airline Pilots’ Association (BALPA) and other aviation and ATM stakeholders got together for a one-day Controller-Pilot Symposium on the 24th of October at the Holiday Inn London Heathrow M4 Jct 4. The event attracted around 60 aviation and ATM professionals and the discussions therein showed the level of interest pilots and air traffic controllers have in the future of their professions and the changes coming their way. 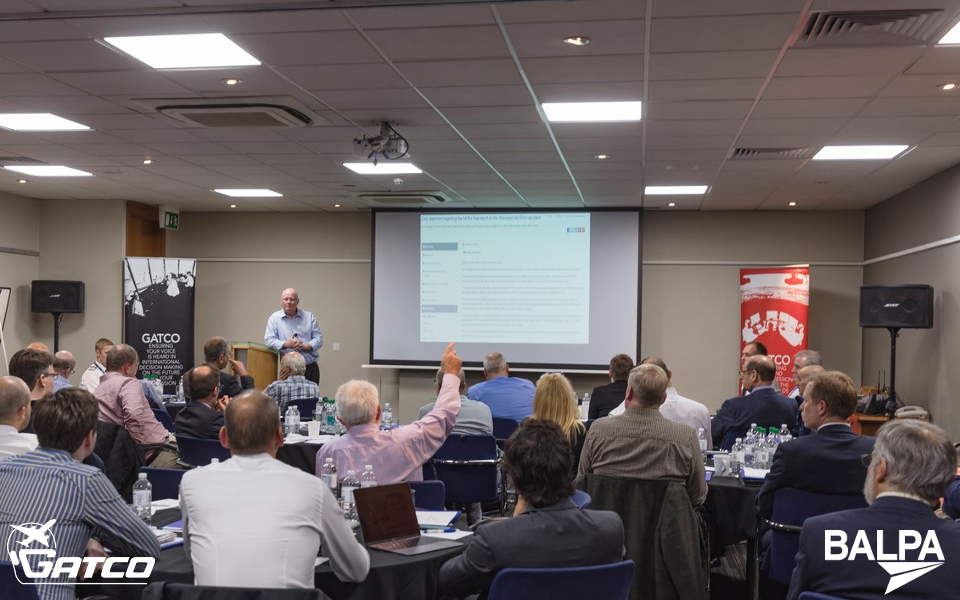 The symposium included six presentations covering a wide range of topics of interest to both pilots and air traffic controllers. In addition to the break out time for a very valuable networking opportunity between pilots and air traffic controllers, the day ended with a panel session where attendees and speakers were able to discuss the most pressing matters affecting the aviation and ATM world. In addition, Micro Nav, a corporate member of GATCO, attended the event and displayed their BEST remote tower simulator platform.

Luis Barbero, President and CEO of GATCO, opened the day with a presentation on the radical changes GATCO and the International Federation of Air Traffic Controllers’ Associations (IFATCA) believe can dramatically improve the efficiency of the ATM system. He also suggested that some aspects of the ATM system will not change in the near future: the very important role of the human and the sector-based operation of the airspace. Andy Shand, GM Customer Affairs of NATS, gave an overview of the changes that the UK airspace, the tools air traffic controllers use and the procedures they are following will experience in the next 5-10 years. Although the changes are ambitious and touch on all aspects of the profession, they are essential, according to Andy, to deal with the capacity and runway demand in the UK, especially in the South of England.

Joe Sultana, Director Network Manager of Eurocontrol, described the initiatives Eurocontrol is taking to deal with weather events in a much more effective way, especially given the highly convective weather experienced during this last Summer. One of the main challenges is the fact that Eurocontrol members have their own independent national weather forecasting organisations and there is no common forecast used for making coordinated decisions regarding capacity and regulations. Andrew Hamilton, Unmanned Aircraft Systems (UAS) Sector Lead of the CAA, explained the current regulations regarding the use of drones in the UK and the future ones being discussed at European level. Although the responsible hobbyist does not represent a threat to aviation, negligent/criminal users and operators willing to operate Beyond Visual Line of Sight (BVLOS) pose a significant challenge in terms of enforcement and integration of UAS in the ATM system, respectively.

Rob Hunter, Head of Flight Safety of BALPA, gave an overview of the ICAO classification of accident investigation findings, where there is a tendency to try to find a single cause-effect link to explain the reasons behind an accident.  However, systems in aviation and ATM are large and complex, which results in accidents and incidents being caused by a combination events. Those events normally have a considerable systemic component which should move the focus away from “finding something/someone to blame”. Sarah Booth, Research Manager of  Clockwork Research, described the effect fatigue can have not only on an individual but also on an organisation and even on the economy of a country. Fatigue Risk Management Systems have been used in aviation for a while, but new European Aviation Safety Agency (EASA) fatigue regulations for air traffic controllers are just around the corner, moving from prescriptive limitations to a system where, accepting that fatigue will always be present in the operation, the focus will be on managing risk.

The panel session gave attendees an opportunity to ask additional questions and bring up topics of concern. The actions of pilots and controllers in the event of a drone sighting, the insufficient new laws from the Department for Transport on the use of drones and the long-term effect fatigue can have on the professionals operating an over-stretched system featured prominently. The final message of the day was clear: BALPA and GATCO are going to continue to work together so that the the voices of pilots and air traffic controllers are heard at the highest level. It is imperative that the knowledge and experience of aviation and ATM professionals are taken into account by decision makers to ensure the safety and efficiency of our industry are not compromised.

You can download all the presentations from the symposium below: